skip to main | skip to sidebar

The Man Who Felled A King 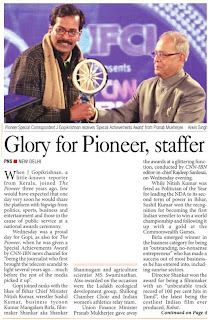 The man who felled a king
Chandan Mitra New Delhi

The Pioneer felicitates J Gopikrishnan, who unearthed the spectrum scam

For a long time, I did not even know that J Gopikrishnan was a stringer based in Thiruvananthapuram working for The Pioneer’s now-aborted Kochi edition. So when he came to Delhi pleading for a job at the headquarters once the Kochi edition shut in 2007, I was rather sceptical. I told Bureau chief Navin Upadhyay that although I had noticed a few bylined stories by him, Gopi had no exposure to Delhi and, therefore, was unlikely to have any worthwhile contacts here. Navin, however, persuaded me to try him out for three months. In fact, the letter of appointment specifically mentioned this along with a “stipend” that was truly laughable by Delhi standards.

Gopi did not break any earth-shaking stories during the trial period. But his sincerity, diligence, dogged pursuit of stories and pleasing personality made up for that. He was given a proper appointment letter after three months although his salary remained rather low. My opinion began to change after friends in Left parties began to mention him to me in Parliament’s Central Hall, pointing to the depth of his knowledge of the telecom sector. Officially, he was on the Left beat so I still did not attach too much significance to that.

Then the cascade began. Starting mid-2008, he broke one story after another on scandalous ramifications of the 2G spectrum allotment. The issue was complex and most people don’t understand its intricacies even now. But Gopi had cracked the scandal.

And as one exclusive report followed another, information flowed to him like a magnet attracting pins. Navin worked hard on these reports, filling up missing links, polishing them and quoting relevant documents. The 2G scam was Gopi’s passion and he scoured the Net, apart from visiting officers in their offices and homes, gathering material. He had friends across the political “spectrum”; Gopi, despite his Kerala origins, was ideology-neutral.

I don’t know how much pressure he came under and from which quarters. But I faced more pressure over these reports than anything else in my 27 years of journalism, of which nearly 20 have been spent in senior editorial positions. I am proud to have withstood them. But even more proud that I gave a dynamic young man from Kerala a break in the national media, a break he used to do the nation a sterling service. J Gopikrishnan has made history and The Pioneer basks in his achievement.

The Pioneer Investigative Team asked Gopi to unravel his journey from a fledgling political reporter to giant killer. Excerpts from a chat:

Q: How did you come across the 2G scam story?

A: We sensed a scam when Swan and Unitech started offloading shares at whopping prices of Rs.4,500 crore and Rs.6,200 crore in September 2008. Bureau chief Navin Upadhyay asked me to dig for information and luckily we got a great whistleblower, who knew the ins and outs of the Telecom Ministry. He once told me the PM was totally unhappy with Raja and had summoned him to ask what was going on.

Slowly, the whistleblower narrated the entire range of corruption in the Ministry. Those days, Minister Raja was making false claims that he had followed his predecessors. This young Government officer told me about the parking of funds in front companies by the Minister and his associates in the name of relatives. He told me who the actual beneficiaries of the scam were, including corporates, politicians and lobbyists.

This officer asked me to talk to my Editor and get his consent and only then would he reveal further. The Editor told me to go ahead and the whistleblower became a goldmine of hidden information for The Pioneer. Days and nights of discussion and checking the authenticity of facts happened in his office and at many crowded places in the city, once it became important to avoid detection.

Q: Which was the first story you did and what was the reaction?

A: After finding out the gamut of front companies dealing in real estate, we decided to expose Raja’s ill-gotten wealth. Chandan Mitra and Navin Upadhyay saw all documents and decided to go ahead with the series. The first story appeared on December 11, 2008, on Raja’s main real estate front company, Green House Promoters. The details of other companies and hidden irregularities in the spectrum scam were published over the following days.

Q: Did you come under pressure to stop the campaign? How did you ward them off?

A: I met Raja after the first report, as directed by the Editor. He alleged that I was being funded by his rivals in the party and even told me some names. He was visibly shaken asking me how I got the details of his personal assets. He requested me to avoid writing. My reply was that I had been deputed by the Editor only to take his version, nothing else. Raja agreed to speak, but repeatedly requested me to stop writing further on this. Similarly, many corporate groups were after me with the same plea. I must say none threatened or behaved badly.

Those days, Raja was planning to conduct the 3G auction at cheap base rates without Cabinet’s approval. Many agents from the corporate sector requested us to stop our series of exposes, saying our reports would force the Government to refer the 3G auction to an EGoM. We told them that was exactly what we wanted. But I must say some friends with contacts in high places warned me I may be targeted. It was a hidden warning, which I ridiculed. It would not be fair to reveal what kind of offers were made by different entities to avoid the 3G issue going to an EGoM. But finally, the Cabinet referred it to an EGoM, which put Raja out of the picture and the nation netted Rs.1.06 lakh crore.

Q: Did any political or corporate entity offer you financial inducements to stop writing on this?

A: Yes, they did. The figures were mind-boggling. Corporate lobbyists and Raja’s people even asked me to stop informing the Editor and end the series abruptly. I told them even the meeting with them was in the knowledge of the Editor and the Bureau chief. Some shameless fellows tried to access Raja, claiming friendship with me. Some were acting as double agents. One top lobbyist was actually a double agent. That person was leaking information against Raja while providing information to him too. Pressure on the whistleblower was enormous by now, but he stood by us fearlessly. There were several politicians who enlightened and encouraged me. Some bureaucrats and police officials also guided our investigations.

Q: Do you think the matter will end with Raja’s resignation or will more heads roll?

A: I personally feel the court cases filed by Subramanian Swamy and Prashant Bhushan would come to logical conclusions, leading to the cancellation of all licences which were found illegal by CAG. The court may direct auctions to be held like the old petrol pump scam of Satish Sharma. I don’t expect anything from the Government in this matter. Some persons, including Raja, may face the wrath of the law. I don’t think anything harsh will happen to corporates from the Government’s side. After the CAG report and PAC findings, if the Government has the willpower, it can -- by executive order -- cancel all licences and order auction, which will definitely fetch around Rs.2-3 lakh crore.

Q: How do you think the Government can make the spectrum policy transparent and above board?

A: Spectrum management should be handed over to ISRO, but no politician would like that for obvious reasons. In India, spectrum is not yet audited. No one knows how much spectrum is available. This was purposefully done for making easy money. First the Government should ask an organisation like ISRO to audit spectrum availability in all departments. Only then will transparency come.

Q: After Telecom what? Do you have more targets in mind?

A: No idea. I felt totally exhausted upon learning of Raja’s resignation. I was expecting good news on Sunday, when sources told me Pranab Mukherjee had firmly asked Karunanidhi at 11.30 am to remove Raja. This was doubly confirmed when they later said Raja was forced to sign the papers around 5.30 pm. Anyway, no idea what’s for me next…life will go on. I was covering Health and Left (parties) those days. By a stroke of luck, Raja came on our radar…
Posted by J Gopikrishnan at 12:58 AM

J Gopikrishnan
Journalist working with 'The Pioneer" daily. Recipient of Ramnath Goenka - Journalist of the Year - award 2009-2010. Profile picture is a painting of mine by Sanjay Chapolkar